This is Kortney. Born in the US of yAy, she toured Aus in 2012 where she was paid to wrestle men and choke them with her legs which are better known as the ‘world’s deadliest thighs’. She married the CEO of Gold Coast Titans and became: a local bogan, Australia’s womenʼs arm wrestling champion, QLD Brazilian Jiu jitsu champion and 3 x international bodybuilding competitor for Australia. Dis bad binch is also an author, TV personality, Olympic lifting coach, motivational speaker and a clothing line GRRRL which is all about empowering women cos fck me her story is something else –

You had abs at seven years old?
I was assaulted by a friend’s brother as a child and from there decided I needed to be strong so I could defend myself. I spent my childhood working out in the garage with my brother (who I idolised) mostly sticking to dumb bells and mum’s Thigh Master. I developed body image issues, hating my thighs in particular, and spent years battling bulimia.

Your were offered a scholarship to Stanford University and wanted to be the first female president.
I slayyyed it in high school:  student government body, cheerleader captain, was in a Christian rock band (lol) and my grades were so good that Stanford and a few other universities came knocking wth scholarship offers. But after DJing the end of year high school dance, I came home to find my sister smoking meth. I tried it… and it was all downhill from there. 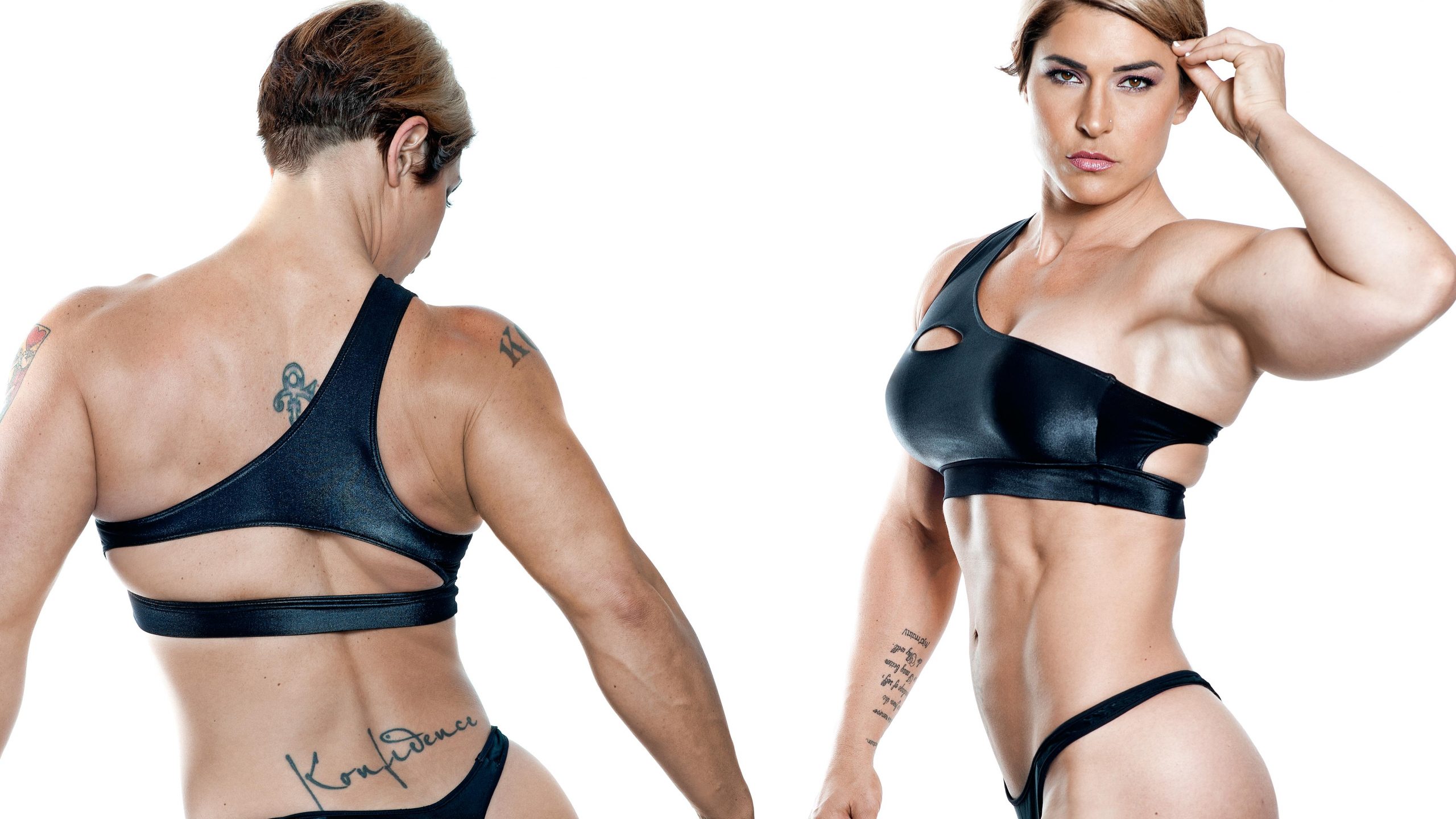 You lost your scholarship for being a methhead and… then it got worse?
I was raped by my boxing coach, became an alcoholic at 17, nearly killed my friends multiple times blacking out drunk at the wheel and began dealing drugs, carrying around a sawn-off shotgun. I put myself into a $30k rehab program the day after my 21st birthday. And then, I became a car salesman.

Oh fark not a fcking car salesman.
It was while selling utes to rednecks that I went for a modelling job on Craigslist for ‘girls with muscular legs’. It was the easiest $100: flex my calf muscles for a camera for 20min. This is how I found out shmoes = men who worship muscular females. Thus began my career in the fetish world, cha-ching. 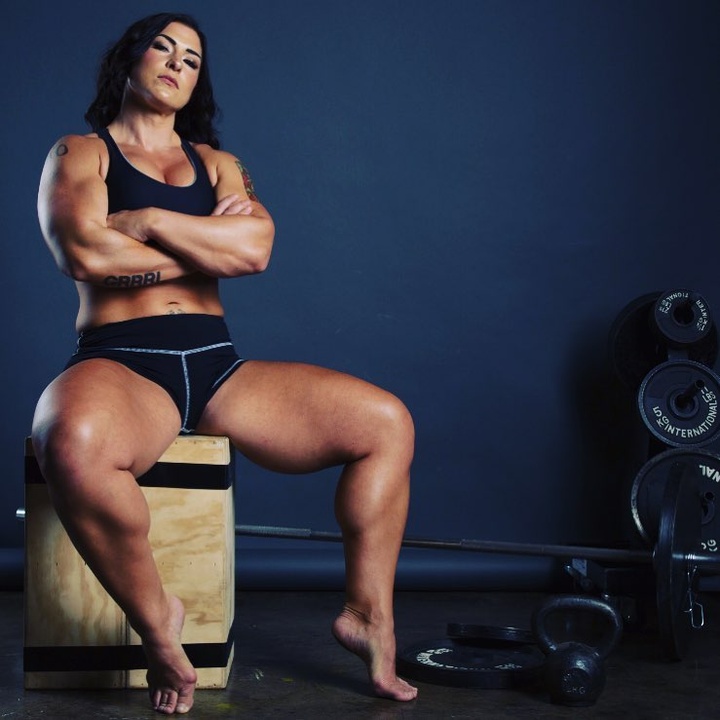 OMG WHAT do they ask you to do?
I started making my own videos then realised I’d make more from circuit appearances and private bookings. My highest paid session was $5k for a guy to rub my calf muscles for three hours while I flexed them. I would also be asked to:

FCKN WHAT – how TF do people get into this kinda thing?
I’d ask everyone after each session, and the main thread I got was most guys developed it going thru puberty: watching WWF and movies like Charlie’s Angels, or from people they knew eg they had a bully baby-sitter or a crush on the girl at school who would beat all the guys in sports.

Were your clients all divorce lawyers?
I’ve had rock legends, federal judges, computer programmers, teachers, cops… anyone who wanted to feel subservient.

Ever knock anyone out?
A guy booked me to a Vegas hotel room for a scissor session. We began – me in a chair, him on the ground – and suddenly I heard a pop. It was the longest and quietest 7sec of my life, until he started breathing (I’d popped his sternum). Then he asked me to break a watermelon with my thighs. The watermelon thing went from there. 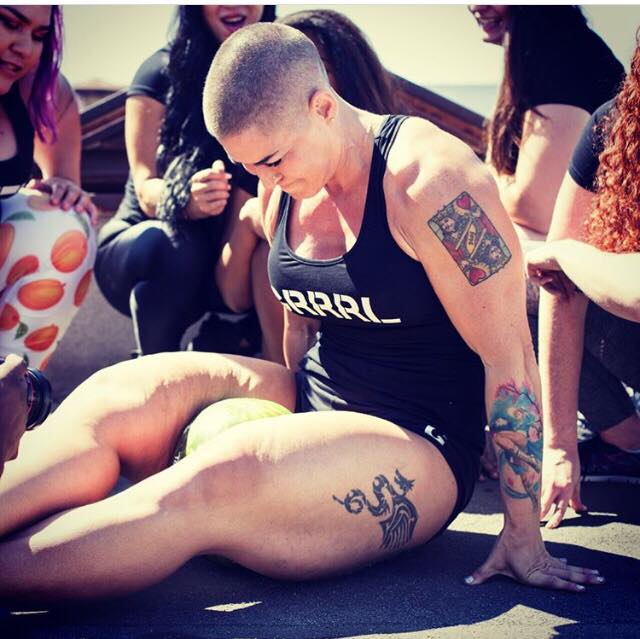 Mucho fame?
I have been on TV lots crushing watermelons for shows like Jimmy Kimmel, The Today Show, The Doctors etc. The Guinness Book of World Records Gone Wild had me crush 8 watermelons in 60sec but the towel they gave me wasn’t absorbent so they kept shooting out of my thighs. Watch Kortney crush watermelons on The Jimmy Kimmel Show

YOU SHOULD BE IN THE NEXT MARVEL MOVIE
Stan Lee heard about my watermelon crushing skills after news stories about my program Kamp Konfidence (a camp to empower teenage girls suffering depression) and asked me to be part of his show Super Humans. He got scientists to measure my thigh strength which is 3 times the crush force of a python. It got me the tag line of ‘the world’s deadliest thighs’. 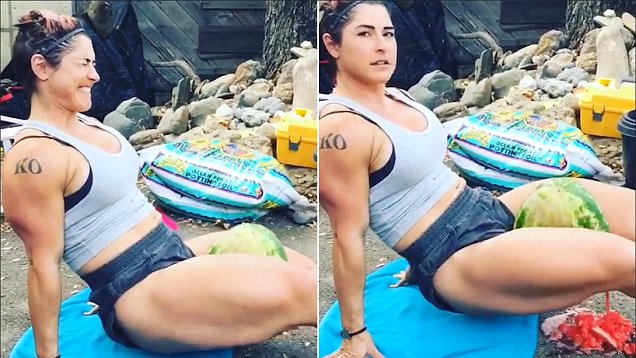 And now?
I’m clean and sober. I’ve realised to have depression is to feel a lack of purpose: I know my purpose is to empower women – which is what I didn’t feel growing up.  I started clothing line GRRRL promoting camaraderie between women: you see the logo and instead of judging another lady on her body you say ‘Yeah grrrl you’re doing good’.
I’m at peace with my body. The thing I hated the most – my thighs – ended up being my greatest asset.

How can I get dem legs I have LITERAL thigh envy
If I had a dollar for every time a guy has said I want your legs I’d be a zah-quillionairre. And you CAN get my legs: you can do my 8 week online course and gets you legs that will crush watermelons. Or choke out guys – whatever you prefer.